Boy!! The accent. Everyone sounds good in London. This is where, Shakespeare performed his plays, where Adele sings her lungs out and Charles Dickens was buried. Well – many more things happen, but I had to mention these three names, I’m biased towards. And the weather – the weather in London is not as fantastic as the accent. It is so unpredictable. Out of the three days that we stayed there, one day it was nice and sunny, the second day it was chilly and windy and the third day, it began to drizzle. Also, expenses. Everything adds up pretty fast.

I did everything that Rick Steve suggested to do (A big THANK YOU to a friend who introduced me to Rick Steve in 2010 when I was getting ready for my first Europe trip) – I blew through the city on a double-decker bus, Stared and photographed the crown jewels at the Tower of London, heard the chimes of Big Ben and quizzed my 4-year-old to tell me the time if the bell rings 4 times, saw the Houses of Parliament (well, from outside), cruised the Thames River, Walked by the banks of Thames River,  admired the London Eye but was too tired to stand in the awfully long line to take a spin, thought about Charles Dickens’s tombstone in Westminster Abbey, visited with Leonardo, Botticelli, and Rembrandt in the National Gallery, shopped at the Harrods, walked the Regent Street, drank espresso in Piccadilly Circus and of course chugged some good amount of gin & tonic.

There are things I missed too. Missed the experience of change of guards (we waited for an hour but the event was canceled), missed exploring the British Museum, missed trying out the eateries in SoHo area, but then so what! I will go back.

Our hotel was located within the walking distance to some of the major attractions – London Eye, Tower Bridge, Big Ben, Westminster Abbey, and St. James Park.

So, the very first day was spent on exploring these near by sights. We set off on feet as soon as we showered and got something to eat. The walk along the Thames was pretty refreshing. I truly believe that the best way to see a place is by walking and wandering aimlessly.

The first thing I noticed about London was, how well the red London buses stand out in a typical grey London weather.

The picture below is two shots that I took of the insides of the House of Parliament, which is consisted of –  House of Commons and the House of Lords. Even though it was re-built between 1840 and 1870, but within its walls is the Great Hall (or Westminster Hall), which still contains the remains of the medieval old palace.

Westminster Abbey – This beautiful Gothic church is a must-see. It’s not only completed with paintings, stained glass windows but also owns a lot of monumental sculptures. I came to find out that, one of my favorite authors – Charles Dickens was buried here and also, the Chapter House has one of the oldest doors dating to 1050. 1050. wow!!! 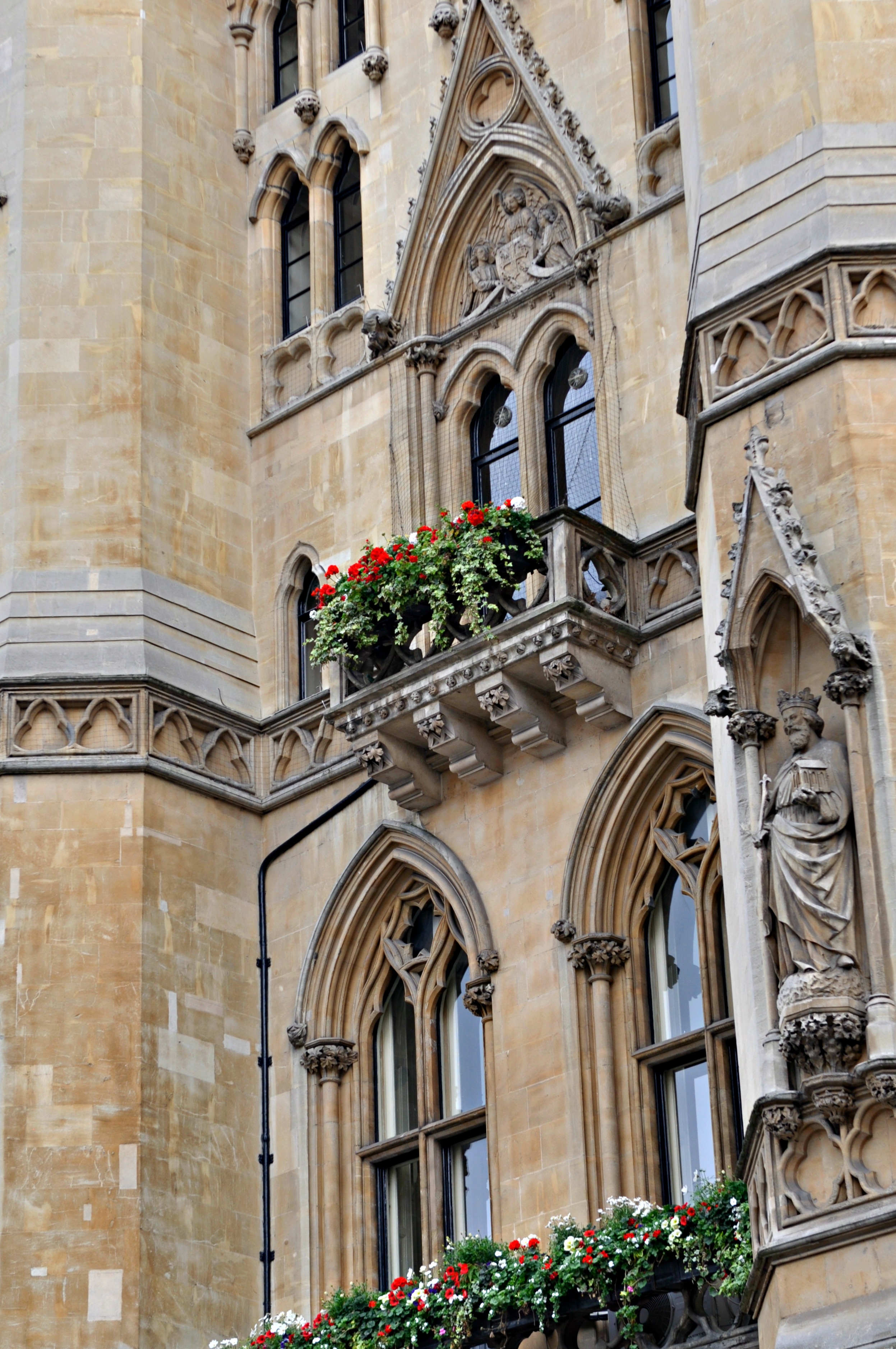 London Eye – Located across the Big Ben on the opposite of Westminster Bridge is London Eye.  It used to be Europe’s tallest Ferris wheel, and offered the highest public viewing point in London until it was superseded by the Shard.

The kids were elated to see McDonald’s and we sat there munching on french fries and watching the stream of crowd. The jet lag was catching up and I was NOT very enthusiastic to stand in the long line to buy a ticket for the London Eye. I clicked some pics and then we decided to head back to the hotel.

The view of Big Ben and House of Parliament from the end of the bridge.

Day 2 started, well rested and with a really hearty English breakfast. I had poached eggs with veggies, hash browns and of course lots of espresso. We bought tickets for the Hop on – Hop Off , other wise known as the Big Bus from the hotel and it was a great idea if you have kids especially less than 5-year-old.

We got down at the Buckingham Palace.  The guide on the bus was really funny and gave us quirky yet some great information about the landmarks. We actually decided to get down by the Hyde Park (Central London’s behemoth of a green space) and walked up to the Buckingham palace. The Change of Guard ceremony was supposed to be held at 11.10am but unfortunately that day it was canceled. Wasn’t sure why. My guess is, could be because of a marathon that took place right in front of the palace.

Next was Piccadilly Circus

After waiting in front of the Buckingham place for good two hours or so, we walked back to Dover Street and wandered about until we hit Piccadilly Circus. This reminded me of Time Square of NYC. The big iconic advertising hoardings, crowding tourists and the famous Statue of Eros complete the look of Piccadilly Circus.

Here are two random pubs captured from that area.

Day 3 started with rain. So what!! I had decided I’ll not let anything stop me from seeing the places I wanted to see, so, I took a big sturdy umbrella from the hotel and walked over to the National Gallery. The rain was cold and continuous but the walk to the museum in that rain was unforgettable. Even though the museum wasn’t far from the hotel, but I kind of messed up the route a bit and ended up next to Tate Museum. I could have done the Tate instead of the National gallery, but I decided against it and walked on to locate the National gallery, which wasn’t far off.

This is the crowning glory of Trafalgar Square– filled with Western European paintings from the 13th to the 19th centuries such as Van Gogh, da Vinci, Botticelli, Constable, Renoir, Titian and Stubbs. I got to see two unfinished works of Michelangelo as well.

By the time I reached the hotel to the waiting family, it was close to 3 pm. We had decided to explore Knightsbridge area – this place is lined with expensive shops, including the department stores Harrods and Harvey Nichols, and flagship stores like –  Jimmy Choo and Manolo Blahnik.

Stopped by at the Harrods and it was an experience in itself. The interiors are full of everything from mouth-watering food halls to gorgeous luxury goods.

Here is a shot of Harrods taken in the late afternoon. I wish I could have stayed back a little longer to see the building illuminated with night lights.

The cake on the right is a Saree Cake.

Last day in London was spent on visiting London Bridge, Tower of London and the Borough Market.

Borough Market – This is the oldest public market of London, flooding with produce from around the globe starting from,  cured meats from Italy and Spain to Britain’s award winning heritage herds. The only thing I didn’t like about this market was, it was way too over crowded.

Random pics of people from the streets of London

I’m scrappy, weird and goofy. I’m a snob when it comes to a LOT of things.., Mainly – coffee, wine and chocolates. I laugh loud and yell louder. I run fast, but walk slow. I love walking long walks with a hot mug of coffee held tight between my hands. I have lonely eyes and a kind heart. I forgive but rarely forget. I remember the silliest of things and forget important matters. I love to run, read, cook and entertain. I draw inspirations from anything and everything aesthetic. There are numerous people who have and still continue to enrich my life in many good ways. I will remain indebted to them – Always. My dad is my biggest fan when it comes to cooking. I could see his eyes light up every time I serve something. My mom’s agility and affectionate nature that reflects on her food is something I’m still trying to master. Travel fascinates me amongst other things. Leave me in Venice and I would get lost in its timeless beauty – The canals. The piazzas. The art. The espresso. Leave me in NYC and I would tirelessly walk the length and breadth of the city (after all, There is always something open 24 hours a day). Through this blog, I am hoping to bring in my passion and love for a few things – Cooking, Travel, Kids, Coffee, Clothes and in the interim learn more myself. Hope I am able to do justice to my PASSION.

Find Me On FoodGawker