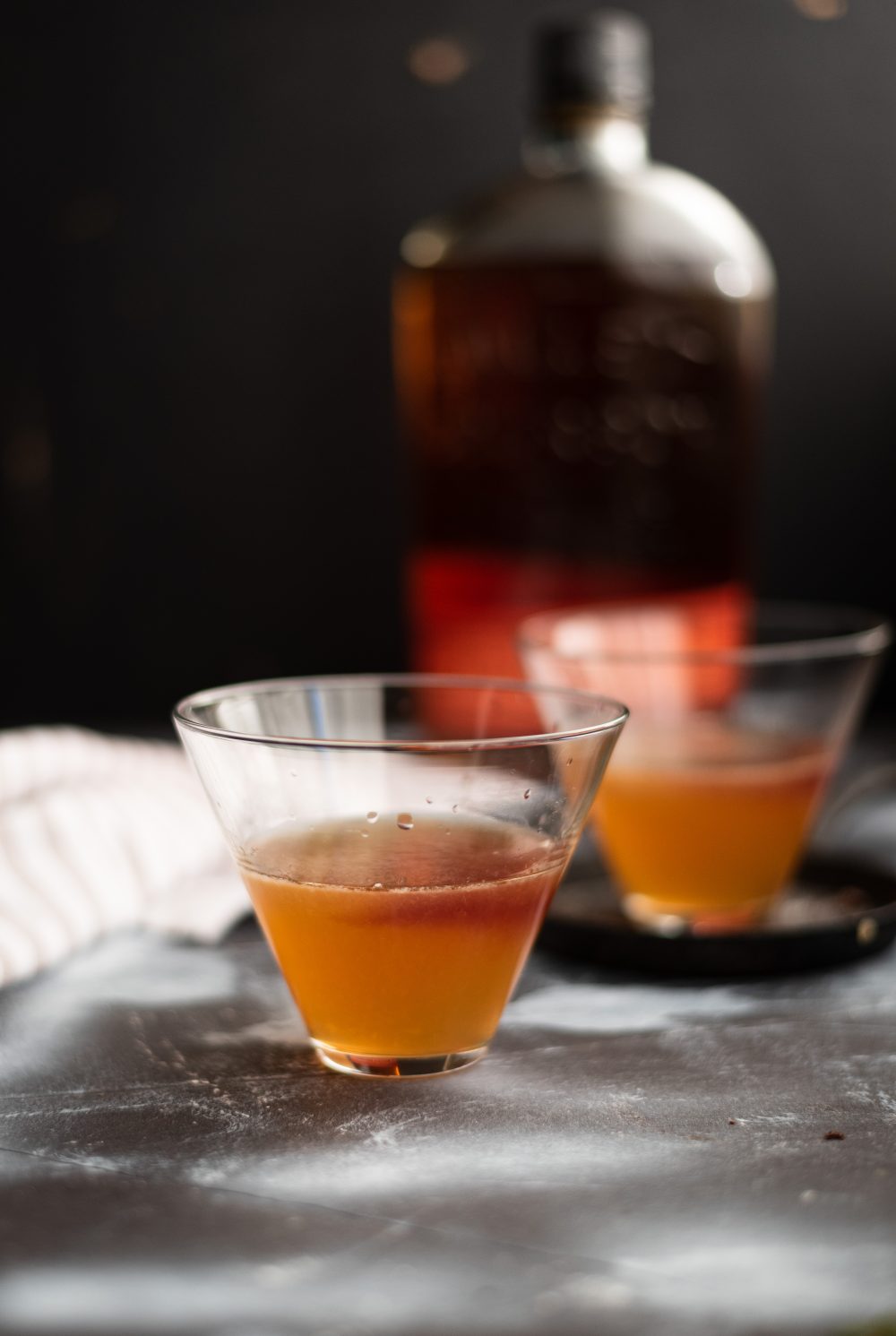 This Honey Ginger Whiskey Cocktail (Penicillin) recipe is one of those warm and soothing cocktails to be enjoyed during the onset of a cold or during long winter evenings or even to sip by the fire enjoying the holiday spirits to it full extent!!!

As the name suggests Penicillin which is supposed to cure a cold and the flu, right? Well, this Penicillin, Honey Ginger Whiskey Cocktail may not really substitute your flu medicines but it certainly has ingredients that soothe the cold and flu symptoms.

The best part? Its a 3-ingredient Whiskey Cocktail. 🙂 The recipe for Penicillin cocktail made with whiskey and honey ginger syrup prefect sipping during the fall or cold winter months.

If you grew up with your mom forcing that honey ginger syrup into your throat on the onset of a cold, then as a grown up you might just love this cocktail. My husband for sure does. If you are a scotch lover like him, you might enjoy  Chocolate Whiskey Cake which is also a potent whiskey dessert.

Do you know, Honey & Whiskey are a thing?

And, its called a Drambuie. This is a blend of whisky, honey, herbs and spices. Drambuie is derived from the Gaelic phrase “an dram buidheach”, meaning “the drink that satisfies”

So, why it’s really called a Penicillin?

The Penicillin was originally created by the New York bartender Sam Ross in 2005. Predominantly, whiskey is the main ingredient in this recipe and the use of ginger and honey syrup makes the strong flavor of whiskey a little less overpowering.

If you are an ardent fan of whiskey ( like my husband, who is a bit if a snob when it comes to – scotch, malt, whiskey), this can be your favorite recipe as well. Truth to be told, whiskey lover or not, this is a very good cocktail. Period.

This Honey-Ginger-Whiskey cocktail aka Penicillin cocktail tastes like a whiskey sour really. You sprinkle a bit of cinnamon and it will taste like fall too. The use of honey-ginger syrup makes the formidable taste of whiskey approachable really.

Whiskey – I have used a good brand of whiskey here (never out of choices when it comes to whiskey because of my husband’s affinity to the scotch and whiskey. You can replace whiskey with scotch too because I think, scotch and ginger make an absolute great combination.

Honey – I have used a local honey in this recipe. Local honey imparts that beautiful floral notes to everything that it touches

How to make Honey-Ginger Syrup?

How to Make the Penicillin Cocktail

When you’ve made your two syrups, most of the work is done. Combine ginger syrup, honey syrup, lemon juice and whiskey with a few ice cubes in a shaker. Shake vigorously for 15 seconds.

Strain into your favorite whiskey glass. I do this, and then I add extra ice cubes in the drink, but that’s just me. So I am not one to judge on how you make your whiskey drinks! I also love to garnish with  a rosemary sprig. It adds a nice, aromatic touch that goes wonderful with ginger and whiskey.

Relax, and enjoy all this ‘cures all’ drink has to offer.

I’m one of those that drink ginger, honey and lemon drinks all year around. They are fresh enough for Summer, and soothing enough for Winter. So I’ve also made a Ginger Lemon Iced Tea or the caffeine free Sore Throat Tea with Honey and Ginger, and if you like the Penicillin cocktail, I urge you to try those as well!

Other uses of Honey-Ginger Syrup?

Honey melts the mucus build up that blocks the breathing passage and leads to Upper respiratory tract infections. And, ginger helps to reduce inflammation of the airway. Therefore, a mix that combines both honey and ginger provides an effective natural treatment for cough and cold symptoms. 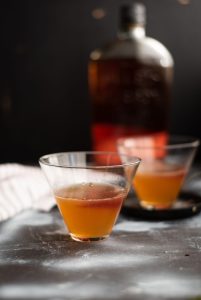 This Honey Ginger Whiskey Cocktail (Penicillin) recipe is one of those warm and soothing cocktails to be enjoyed during the onset of a cold or during long winter evenings or even to sip by the fire enjoying the holiday spirits to it full extent!!!
No ratings yet
Print Recipe Pin Recipe
Prep Time 5 mins
Cook Time 15 mins
Course Drinks
Cuisine American
Servings 1

How to make Honey-Ginger Syrup

How to make Penicillin Cocktail