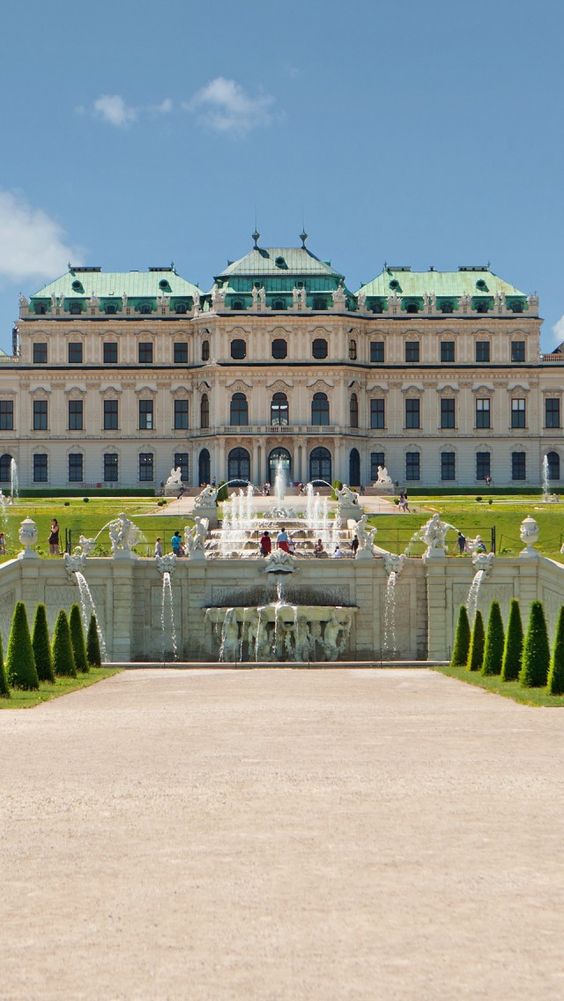 VIENNA – from its baroque buildings, churches, alleys to palaces and museums is as decadent as it’s pastries and coffee. The whole time we were there, I was on an inexplainable high because of my addiction to the old world.  It was hard for me to finish up at one place and move on to the next, because I was in constant fear if missing out. I know! I’m not  a great travel partner.

The train from Prague to Vienna was 4 and half hours long. Not bad at all. We wanted the kids to have that experience of Euro Rail and they loved it. Boys! It’s easy to please them.

We reached late afternoon in Vienna and I was pretty impressed with our hotel – Location,  ambience and of course service wise. Lots of restaurants and ice cream parlors were close by. I was a little disappointed to see that, they hadn’t provided water bottles in the room and later on I found out why. The tap water in Vienna comes straight from the Alps. So, yes!

We set out to explore Prater  which was 5 minutes away from our hotel in the same day evening as well as to have dinner. The main attraction in Prater was the giant Ferris Wheel – Built in 1897. We didn’t go on the Ferris wheel, but walked around – ate dinner, had ice cream, took pictures and then headed back to the hotel.

We had decided to spend the first day in Vienna on feet and by doing general wandering. With a little help from Steve Ricks again, we started with Vienna Opera House.

Took the picture from across the street. 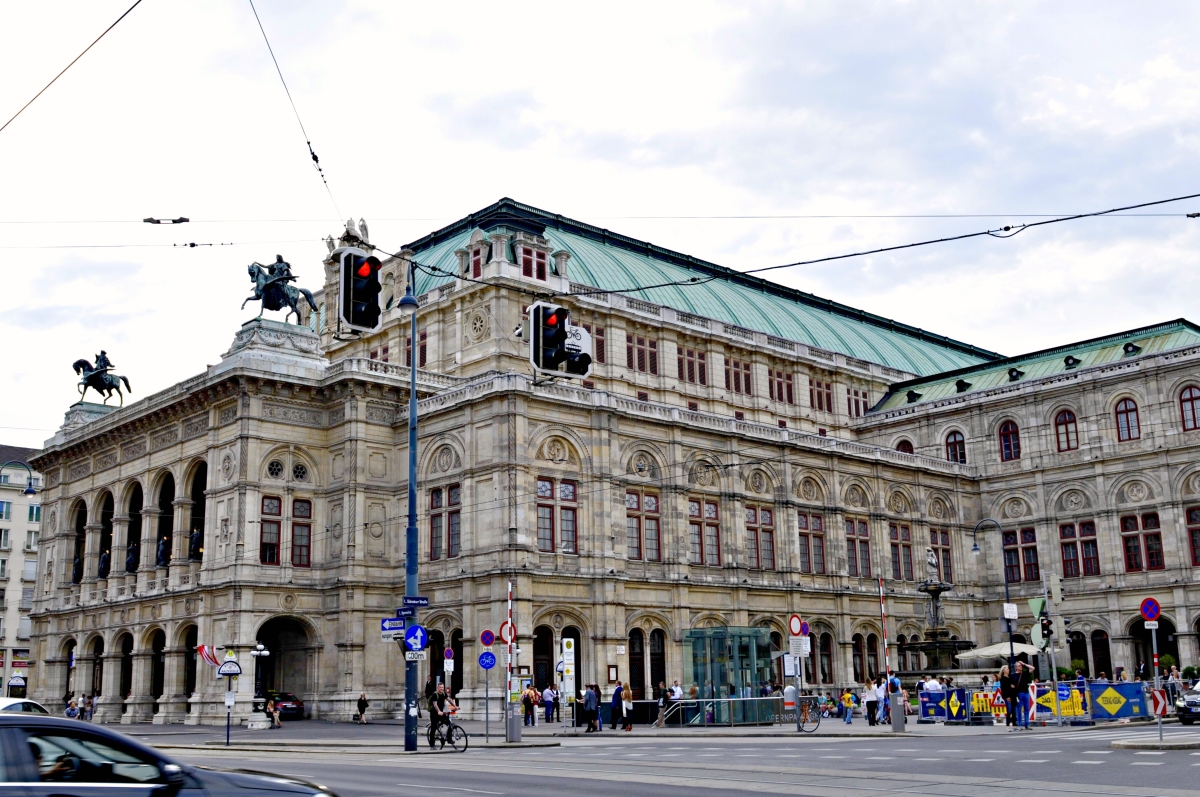 This French Renaissance structure was the first of the many monuments built during the massive Ringstrasse project. Franz Joseph began the development around 1850 on land reclaimed from the razing of Vienna’s medieval fortifications. 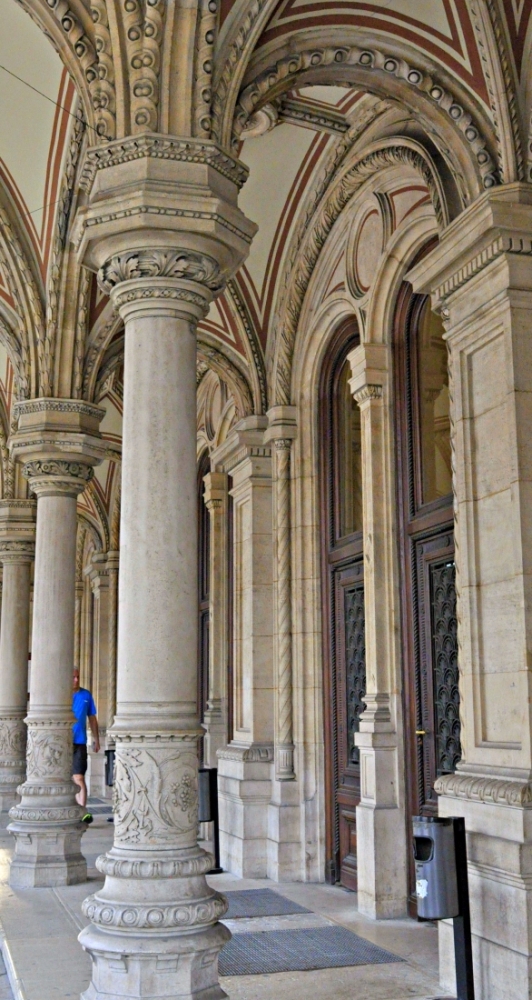 Next to the State Opera house was Hotel Sacher – world famous for its Sachertorte. I had to go there because, I wanted coffee and some pasties. The world famous chocolate torte actually lives up to its hype and the coffee was great – of course. 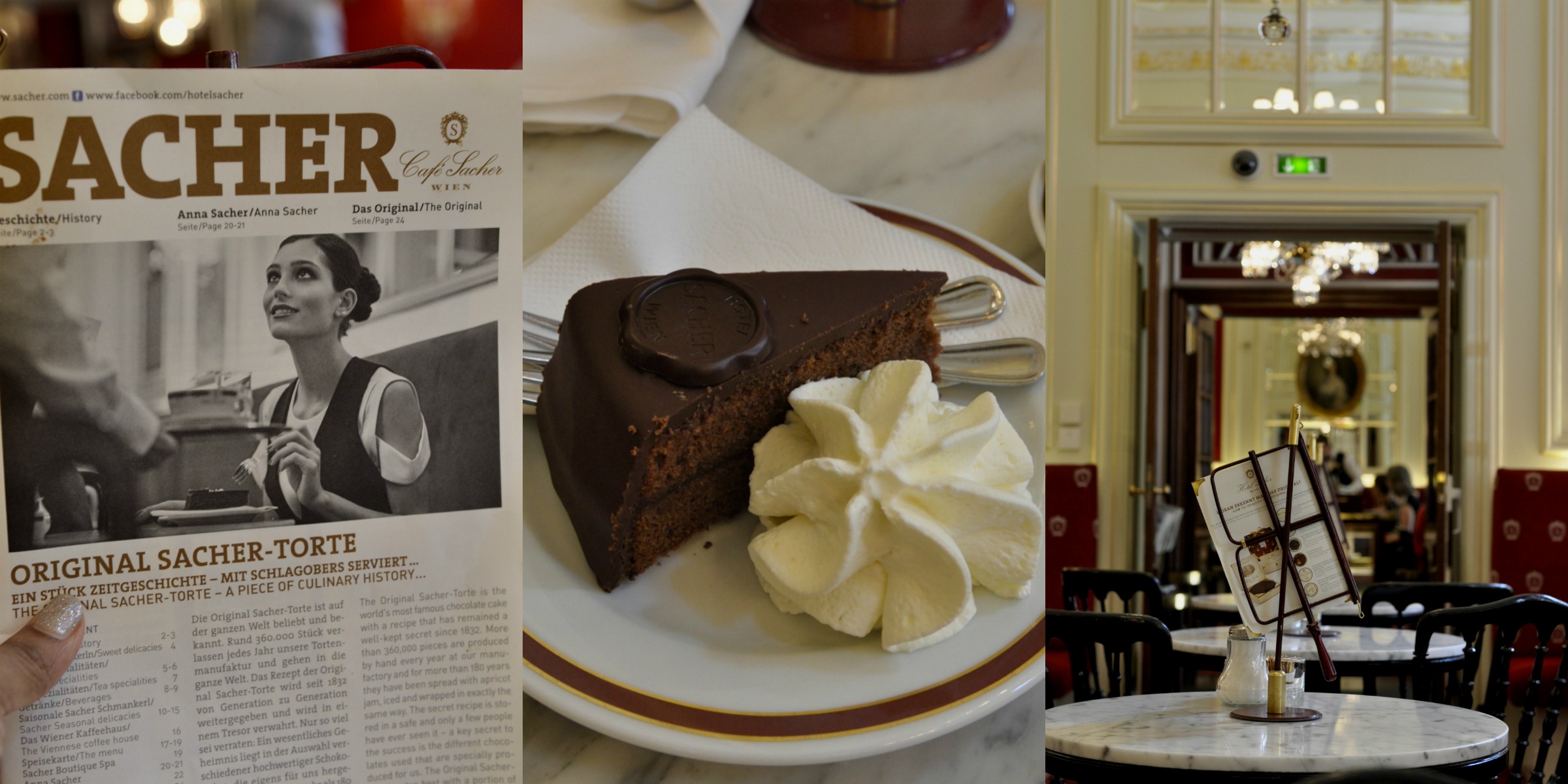 I loved the refined decor and crystal chandeliers and yes, the torta and the coffee was to die for. A Must Try.

Just a few steps away was the  Albertina Museum – famous for arts collections of Monet and Picasso.

Then we walked to Karlskirche (Church of St. Charles).

This incredibly large St. Charles Church from 1737 stands with its Baroque architecture with a large pond in front. This church was built between 1716 and 1737, by Emperor Charles VI. 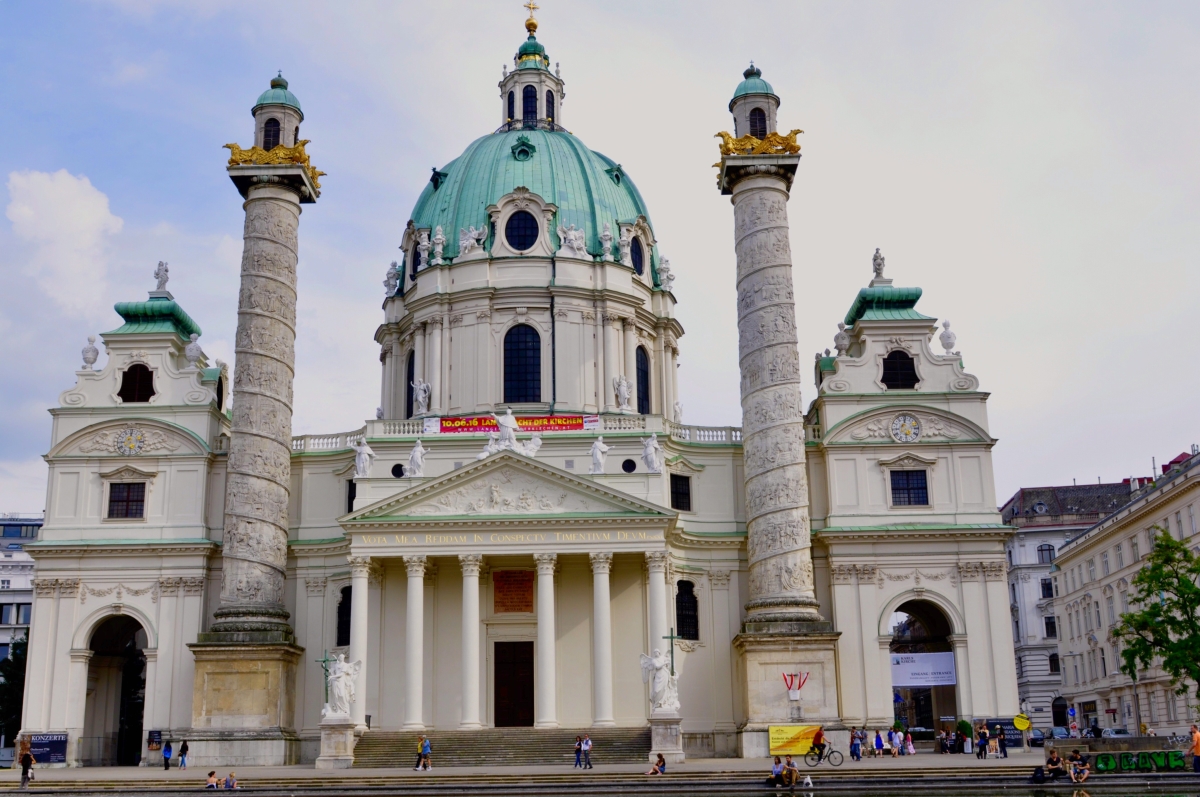 To construct the skeleton of the church’s dome, 300 massive oak trees were used. The twin towers in front were inspired by Trajan’s Column in Rome, the Pillars of Hercules (Gibraltar) in Spain, and Mannerist renderings of what contemporary historians imagined as the long-lost Temple of Jerusalem. 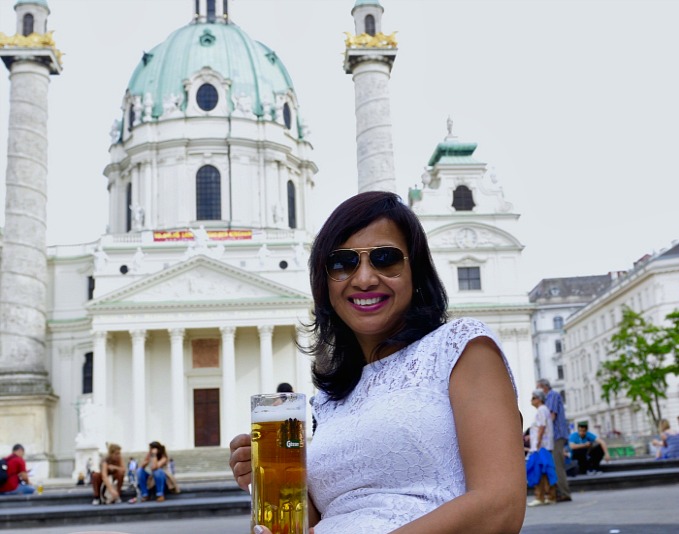 We came back to Graben street again. Main plan was to explore Hofburg Palace and St. Stephens Church.

St. Stephens Church is the most important religious building in Vienna, has witnessed many many important events in Habsburg and Austrian history – Mozart’s marriage in 1782 to Joseph Haydn as a choir boy. 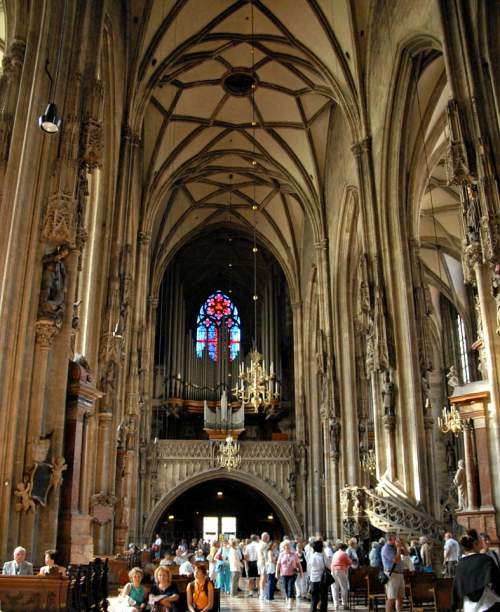 The grandeur of this church needs to be seen to be believed. I took probably 20 to 30 pictures, but nothing came out that good. It was unusually dark inside.

The picture below is an engraving on one of the church pillars. 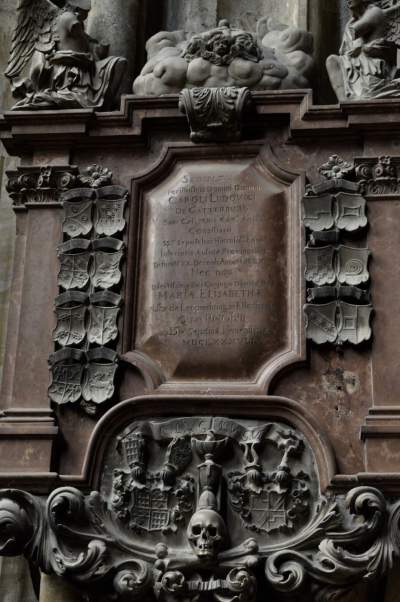 The oldest remaining parts of the church is the Giant entrance which dates back to 13th century. From then on, it took over two hundred years for the building to reach its present shape: The most prominent feature of the Cathedral is the Gothic South Tower, which was completed in 1433. The unfinished North Tower was capped with a makeshift Renaissance spire in 1579. During the 18th century, the cathedral was decorated with Baroque altarpieces – the panel of the main altar shows the stoning of its namesake St. Stephen, the first martyr of Christendom. So, you see a combination of Gothic, Renaissance and Baroque architecture embedded so beautifully.

We spent around 2 hours in the church and then walked over to Hofburg Palace: Michaelerplatz. This is a Neo-Baroque monument.  In the middle of Michaelerplatz are excavated Roman ruins of medieval foundations. 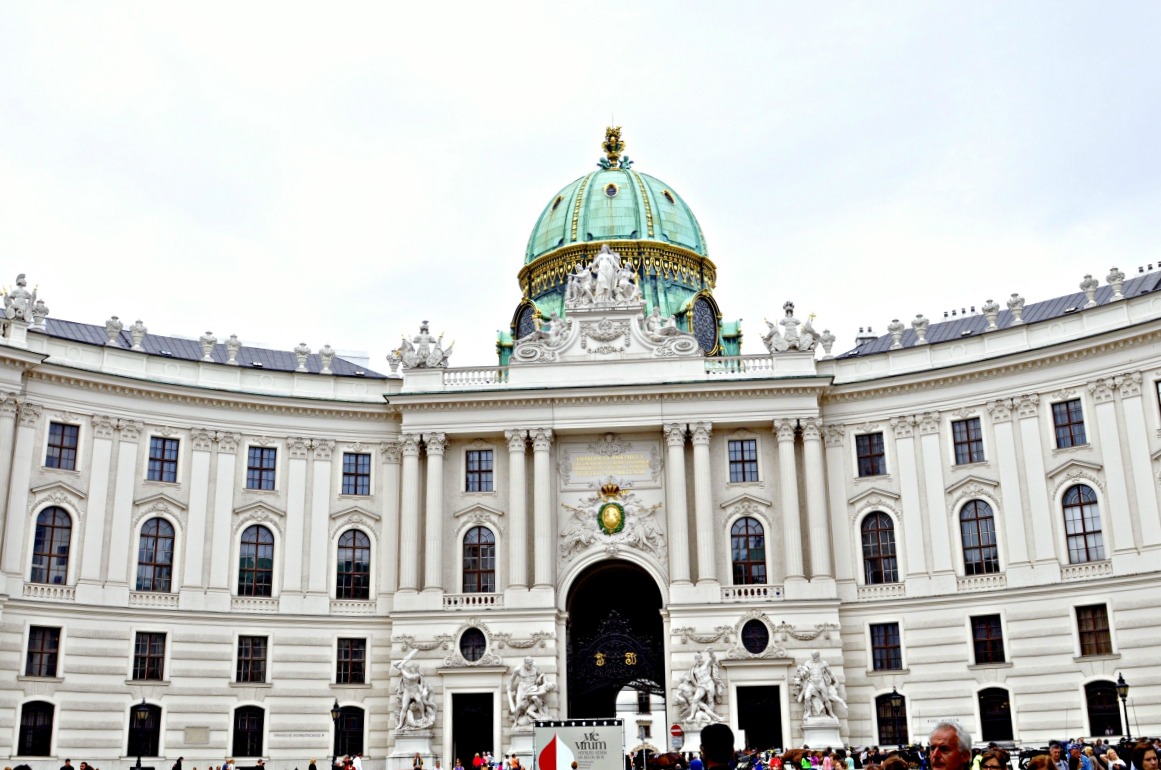 Within the circular area there is St. Michael’s Church from 1792, which is one of the oldest churches in Vienna and one of the few remaining Romanesque buildings. It is dedicated to the Archangel Michael. 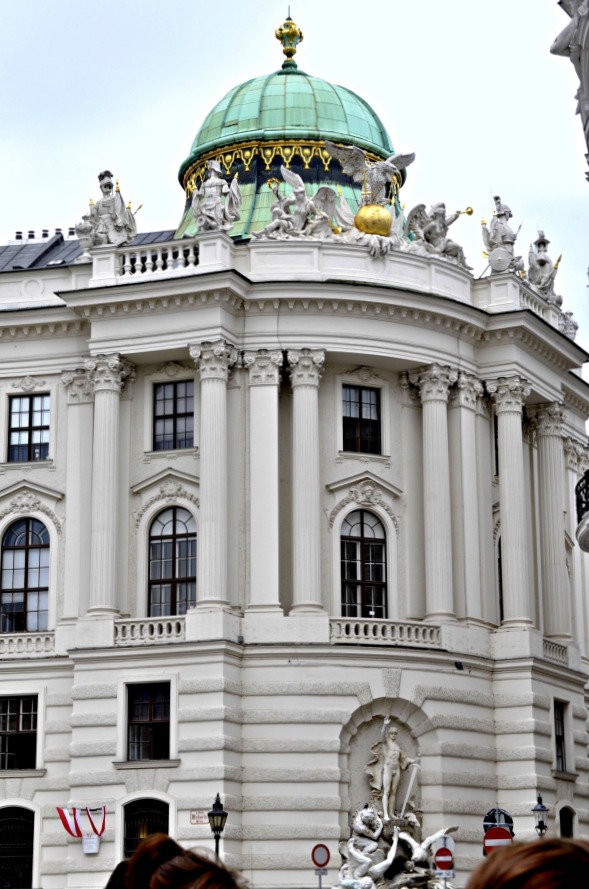 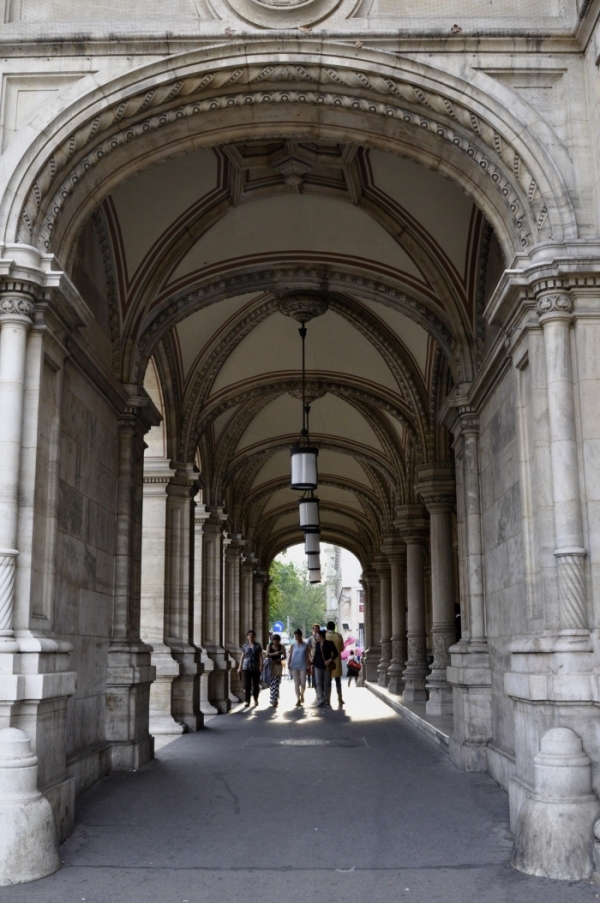 Time flies when you are engrossed in old churches, breathtaking views, excellent coffee. We wrapped up Day 2 with Mozart’s status and then headed back to the hotel.

Mozart Statue in the Burggarten Garden 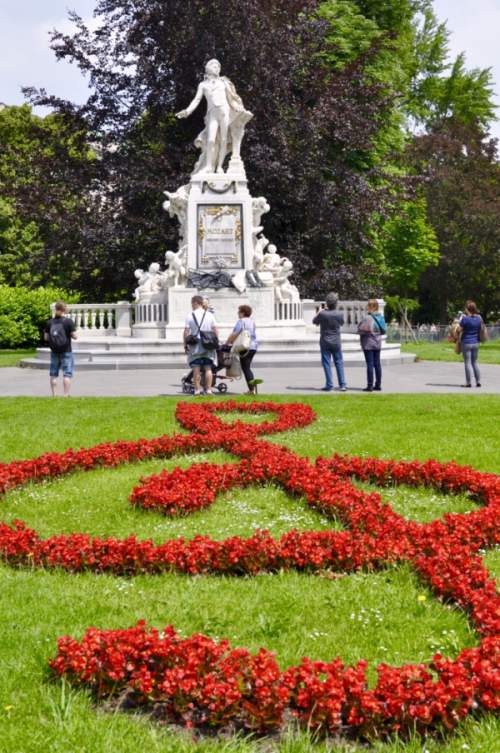 Loved these fun pink flowers planted in the shape of a treble clef in front of the Mozart Statue. 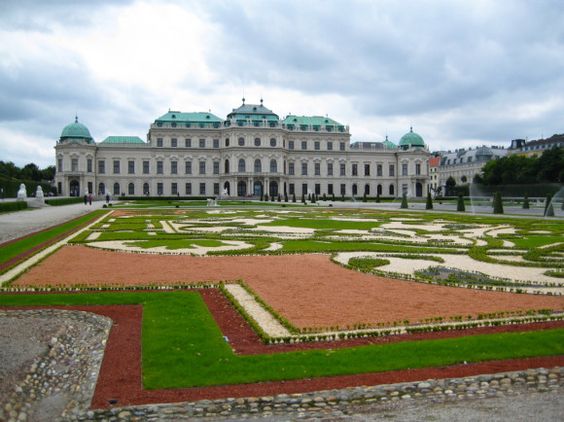 After St Stephen Church,  The Belvedere is my second favorite. I REALLY WANTED TO SEE Gustav Klimt’s “The Kiss”…, and it was breathtaking . However, Before entering the building, the expansive gardens are a showstopper. We spent our early morning roaming the gardens, exploring the palaces, drinking coffee and taking in some of Austria’s most influential art. 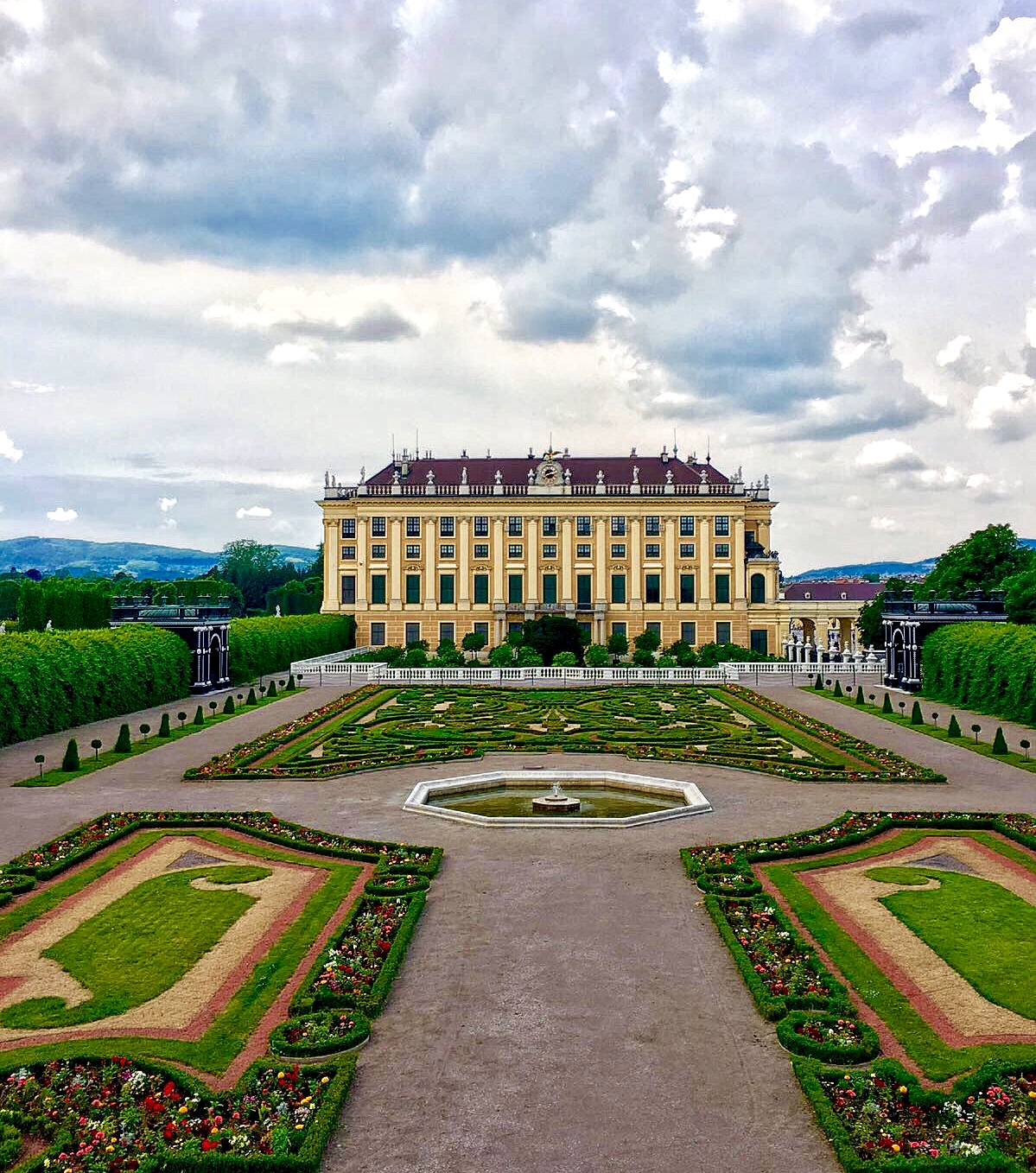 Schönbrunn Palace from the Palace Garden 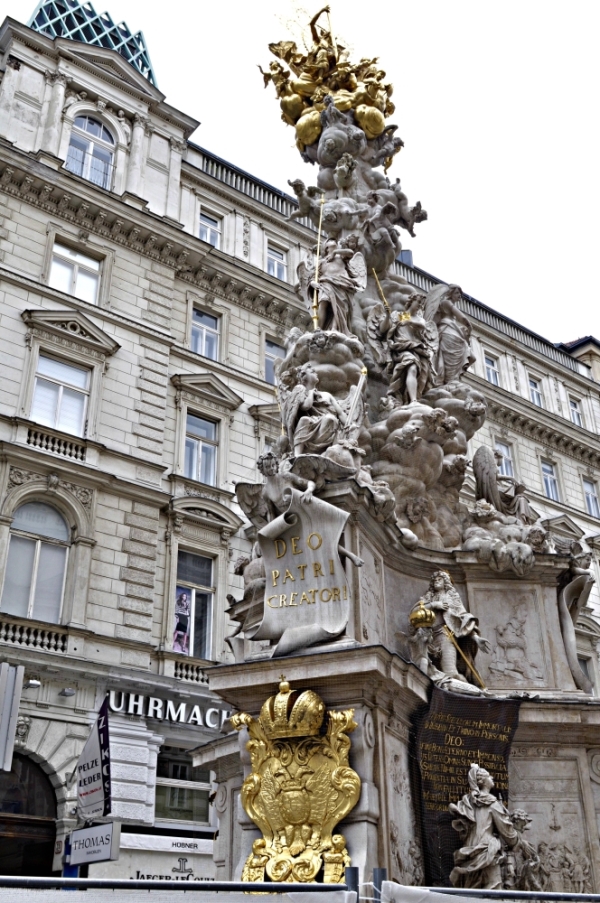 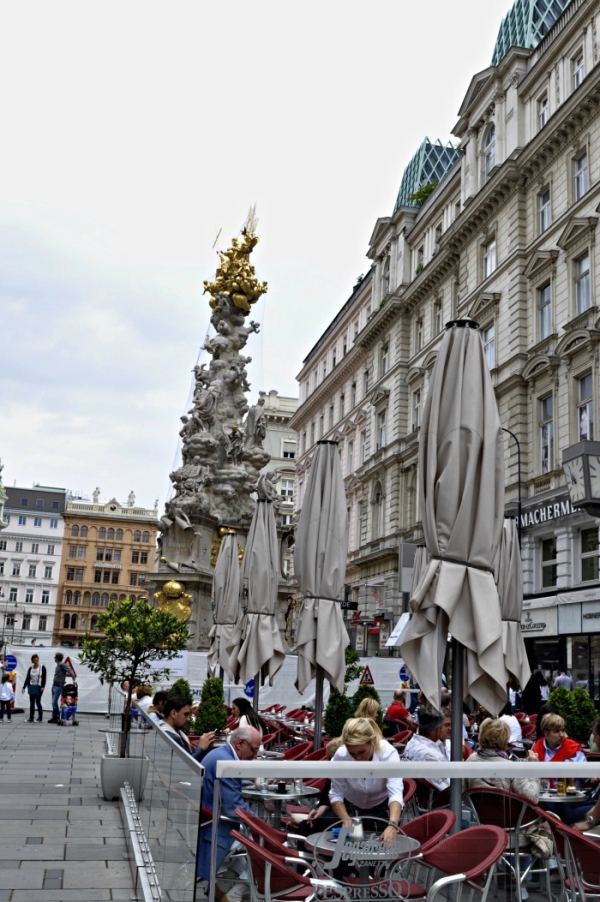 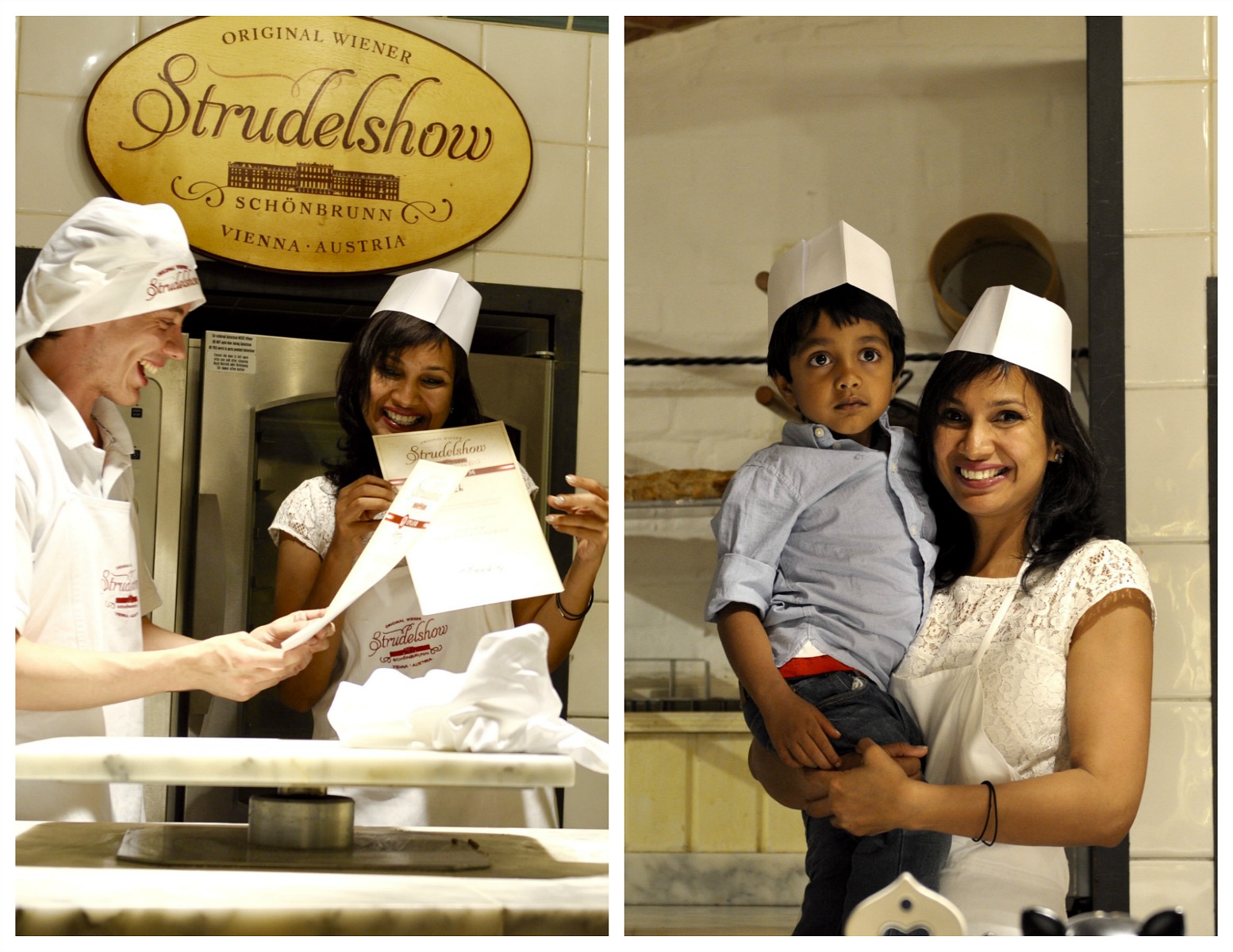 Loved this building. It was built by Austrian architect Friedensreich Hundertwasser. I loved the yellow and pink exteriors, being a complete sucker for feminine pastel colors,

A good way to see some of the city’s incredible architecture while becoming acquainted with the layout of the city is to explore the Ringstrasse, a ring-shaped boulevard that takes you through some of the most historic buildings in all of Vienna. Like most streets in Vienna, Ringstrasse also allows for ample opportunities to duck into a café while also offering amazing shopping venues. 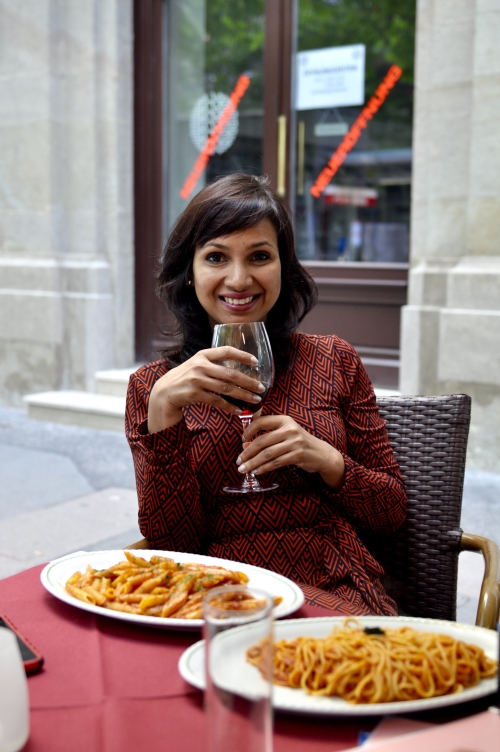 Check out – LONDON – Grey Skies and Red Buses and PRAGUE – So Uniquely Medieval!